Wikimedia Commons has thousands of images that need to be cleaned up. These are organized into categories at Images for cleanup. While most of these categories require manual fixing, some of them can be partly or entirely automated (and should be fun programming exercises).

The Images with borders category was the first to catch my attention. Just look at it: 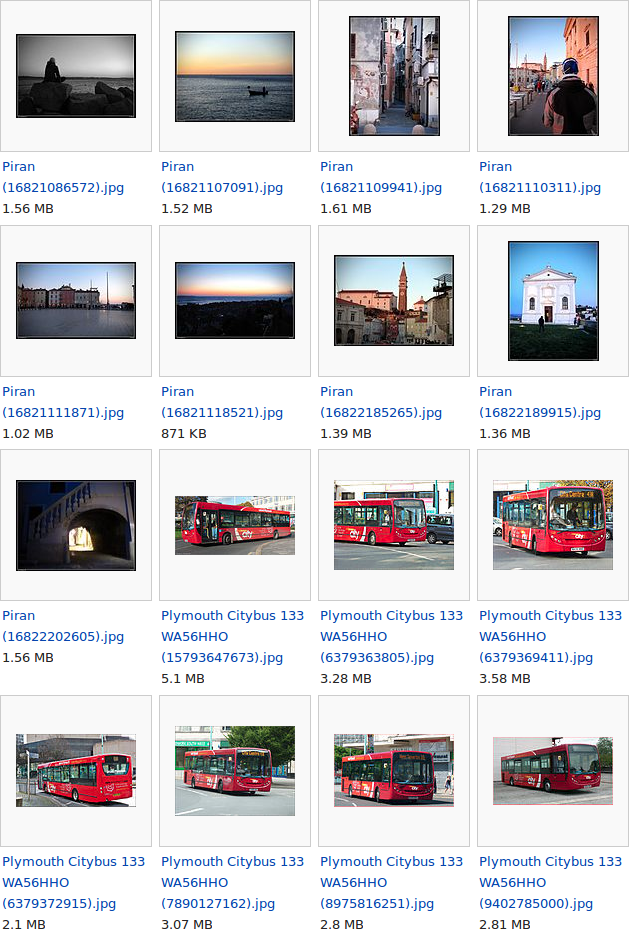 How hard could it be, right? Not very, but to make things just a bit easier I decided to work on the Plymouth bus subset (n = 380) first, as these all have similar (but not identical) borders.

The first step is to fetch a list of all the images in the Image with borders category, then select and download the Plymouth subset. This script does just that:

Notice that multiple API calls are made. This is due to the 500 results limit (it’s 5000 for accounts with the bot privilege set). The API returns a parameter called gcmcontinue. By adding this to our next API call, the next batch of 500 will be returned. This is repeated until the API runs out of items to return (in which point the gcmcontinue parameter won’t be included in the API’s response anymore, which is the trigger that makes the script exit the for loop).

jq is used to extract the image URLs from the API query and add them to an array.

Once we have our array with the image URLs from all of the API calls, they are downloaded one by one using wget.

As recommended by the {{Remove border}} template, jpegtran is used to do the cropping because it allows for lossless manipulation of JPEG images. Given that we’re going to crop hundreds of images manually (sorry, no fancy machine learning here), the processing pipeline needs to be as efficient as possible. This is what the procedure looks like for this image:

The reason step 4 is not performed on the top and left side of the image is that jpegtran can only cut at MCU boundaries for these sides. I suppose this is a limitation imposed by the JPEG standard itself.

Here’s a video of the whole procedure:

Of course, using feh to display the borders and strips, and capture user input is a rather quick and dirty approach, but quite functional, which is what I was aiming for after all.

The script that does all of the above:

To crop all of the images, we simply loop over the images in the images_unprocessed/ directory, like this:

Once all the images have been cropped, pywikibot is used to upload them to Commons and to remove the {{Remove border}} template from page.